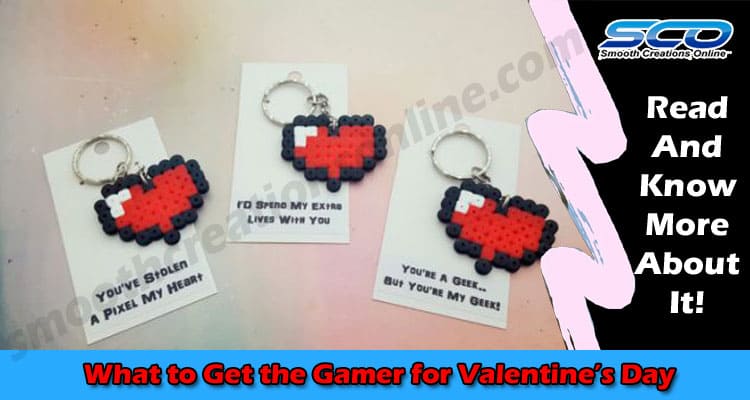 What to Get the Gamer for Valentine’s Day: It is commonly believed that an average gamer is a person without an active social life, immersed exclusively in the game world. However, the simplest statistics prove otherwise. Video game fans successfully start romantic relationships, balancing the battles in virtual battles and real dates in cafes. When choosing a gift for Valentine’s Day, you can rely on the gamer’s hobbies while considering their hidden desires and his best OS for PC gaming. Here are your top gamer gifts for February 14 – Valentine’s Day 2021.

Gaming items have long stopped being virtual. Today you can easily buy themed figurines, clothing, and accessories with images of popular characters, a large number of key chains, and prints on a cup or phone case. Here, the main thing is not to get wrong with the chosen franchise, making sure that the gamer exactly passed this project. For example, the well-known universe of the “Witcher” series has many accessories: medallions, notebooks, ready-made sets, the board game Gwyneth, posters on the wall, puzzles, and even a full-size prop sword.

Given the cold weather outside, you can opt for clothing, such as warm socks with a picture of the characters of the franchise. Remember, the best gift is a useful gift.

When it comes to gaming merchandise, Nintendo has proved to be the best in this matter: collectible Amiibo figurines are available for the Switch console (as well as the Wii U) and a number of its exclusives, which, when scanned via NFC, allow for in-game bonuses. At a relatively low cost, Amiibo collecting can become a new hobby for a person.

In addition, there are Nintendo Labo sets, Mario Kart live home circuit, and even the classic Game and Watch, NES/SNES mini consoles for particularly small gamers. Owners of Sony PlayStation consoles will love the payment cards, exclusive gamepads, and headsets.

Since the birth of the video game industry, the most successful projects have had special extended editions. Along with the standard disc or cartridge in the package, you can find a set of branded accessories, often with letters of gratitude from the authors. Such limited editions expand the impression of the game itself, preserving the collector’s value over time.

When it comes to consoles, there are ubiquitous exclusive versions of consoles made in the style of a particular franchise. For example, PlayStation 4 Slim is designed in the colors of The Last of Us 2 while Nintendo Switch has Animal Crossing style.

Historically, gaming accessories have been more available to console owners. So what to get the PC gamer? Gaming computers need a lot of bright accessories: mice, keyboards, gamepads, headsets, mats, SSD drives, RGB fans, and more. Physical copies of PC games are gradually becoming a thing of the past. So a collector’s edition of a classic title is the best way to decorate your shelf space. Fast SSD drives, external drives, memory cards, and flash drives will never be superfluous. For fans of offline entertainment, you can buy a Lego constructor.

Examples of gifts for Valentine’s Day

A modern product from Razer places special emphasis on the quality of the wireless connection. The Razer Basilisk Ultimate Wireless Lite Optical Mouse (RZ01-03170200-R3G1) with wireless (2.4 GHz) or wired connection is positioned as a gaming solution with a sensor resolution of 20000 dpi. The classic matte mouse is equipped with rubberized inserts, lots of function keys, and the possibility to adjust them via software. For charging the built-in battery, there is a docking station and only the brand logo and scroll wheel among the luminous elements.

Western Digital has earned a high reputation for many years of quality HDD drives, but intelligent upgrading of the technological process has led to the creation of reliable SSD drives. WD SSD Green 240 GB (WDS240G2G0A) is the “green” series SSD format 2.5 “with write and read speeds at the limit of SATA rev. 3.0 interface (545/465MB/s). Weighing only 32.2g and completely silent, this SSD holds 240GB of data, but Lucky Link has WD models with different storage capacities.

Fans of virtual racing will be delighted to receive the LEGO Technic Top Gear Steer Racing Car (42109) as a gift. The key feature of this version is the remote control via the Technic CONTROL+ app. The interactive gift will allow you to get a lot of positive emotions during the assembly and control via your own smartphone of a real rally car. Suitable for children from 9 years old.

This gamepad completely reinvents gaming perception. Razer Wolverine TE (RZ06-01990100-R3M1) is a fully functional and comfortable handheld that beats masters of the genre such as DualShock 4 and Xbox Gamepad. It has virtually no draft sticks, has rubberized grips, buttons on the D-pad and ABXY group, and Razer Chroma backlighting. Full Xbox and PC (Windows 10) wired, and wireless support is ensured.

A set of three RGB fans from the famous manufacturer is provided to decorate your computer case and increase the efficiency of heat dissipation from the components. Adjustable RGB backlighting and RPM speed can be regulated by the motherboard, in-case controller, or a complete mini-controller. The 120mm coolers themselves are based on a hydrodynamic bearing which means that they make almost no noise.

This model can please not only gamers – HyperX Cloud Core will perfectly cope with games and movies as well as with music playback. The latter, by the way, is a major achievement for gaming models because most headsets are geared specifically for use in games, while music tracks in them are somewhat distorted, losing volume and clarity of sound. Here there is no such a problem. Another plus of the removable microphone is the noise cancellation option. It is moderately sensitive, not distorting the voice. Good for streaming. Also, this model will please its owner with excellent ergonomics and quality workmanship.

A large number of accessories, components, and peripherals for your computer can be found in an online store. It is very easy to choose the right product online, quickly place an order and have time to make a gift for Valentine’s Day.