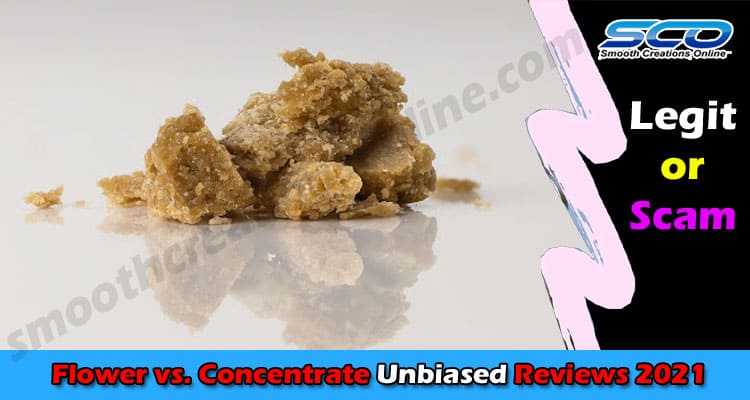 Flower vs. Concentrate: Weed is highly celebrated nowadays and for good reason. The past 10+ years have been a time of much research, discovery, and evolution for the cannabis market. In the beginning, all weed was bud.

The primary focus was on high potency flowers because that is what was available even in legal US states until recently. Concentrates have been around from the moment growers figured out how to produce them in a lab, but they were extremely rare and not accessible to the average consumer because of their novelty, cost, and complexities.

These days, however, the market has grown exponentially, leading to more research opportunities and consistent advancements in extraction technology. Each year there are new ways of making concentrates that provide smoother hits (including lower temperatures) with extremely high cannabinoid percentages in a product that is often less expensive than flower.

Most cannabis users have only consumed either flower or concentrate because so little research has been done in comparison to the other. Because of this, we can compare and contrast them in order to give you (and us) a better understanding of how they differ from one another.

Cannabis flower is the dried and cured product from female cannabis plants, specifically bred for their usefulness in differentiating effects. Commonly known as Bud, it is possibly the most accessible form of weed you can get.

Flower is usually consumed by smoking it with flower vaporizers or in a joint and then either eating the remaining plant matter (for maximum THC) or for those with less tolerance, smoking it as an analog cigarette.

Cannabis flowers are harvested at their highest cannabinoid percentage when they begin to turn brown / red / orange / yellow.

Concentrates can be used in a variety of ways, including dabbing (heating then inhaling the vapor) or eating it as edibles (heated then ingested as an infused food product). The consistency of concentrates can take on many forms, such as thick sticky oils to syrupy kief or solidified cannabis sugars.

Concentrates are commonly referred to by the name of their solvent, including butane hash oil (BHO), wax, shatter, budder, live resin, rosin, and sugar.

Let’s get down to the topic you all want to know about, concentrate vs flower high. When compared to cannabis flower, concentrate is more powerful in that it has a much stronger effect on the individual when smoked.

This comes from both its higher concentrations of cannabinoids (which are psychoactive) and terpenes (which can also affect mood). Concentrates usually contain up to four times the concentration of THC than high-grade cannabis flowers, which can lead to very intense effects.

The THC content of concentrates varies widely depending on the strain and type of concentrate. THC levels for vape oil or shatter are typically between 60% to 85%, while the THC content in honey oil ranges from 30% to 50%. Since these extracts are so powerful, some people dilute them with a carrier oil such as olive or coconut oil before using them.

Though cannabis flower is generally considered to be more cost-effective than concentrates, this isn’t always true. High-quality concentrate can actually end up saving consumers money because it is often much stronger and has a longer shelf life, meaning that it decreases the frequency of use. For example, if you buy a gram of concentrate for $45 but end up using half as much to get the same effect as you would from a gram of flower, your cost per dose is actually cheaper than buying flower.

There are many differences between these two cannabis products that determine whether one or the other is more beneficial.

Consumption Method: Flower and concentrate obviously differ somewhat in the method by which they’re consumed. Concentrates tend to be more potent and therefore usually require smaller doses than flower, whereas with flower, it’s easy to combust a lot at once and there is less of a difference between one unit and multiple units.

Form: Concentrate comes in a variety of forms, such as shatter or wax, whereas flower is usually in bud form. There is also the cursed brick form….but we’re not going to talk about that here…of course no judgments about those who like it!

Shatter tends to be more potent than bud and less harsh on the throat because it’s not combusted, but smoking very high potency shatter can sometimes feel like too much for inexperienced users, especially if they’re inhaling directly out of a dab rig.

On the other hand, it can also be more of a pleasant experience for someone who is experienced with concentrates.

With weed concentrates being stronger, flower is better suited for those who have trouble smoking or those looking for a quick and easy experience. Concentrates work well when you’re really looking for a good session.

But let’s face it, it’s all down to two main factors. Accessibility and personal preference. We love our weed, and usually, we’ll take the best that is available to us. For those who are lucky enough to live in an area where both are easily accessible, that’s when preference comes into the picture!

If you have a preference for any particular type of weed, then go ahead and buy it. Or you could be a true stoner and mix it up when you see fit. There’s nothing wrong with having a variety anyway!