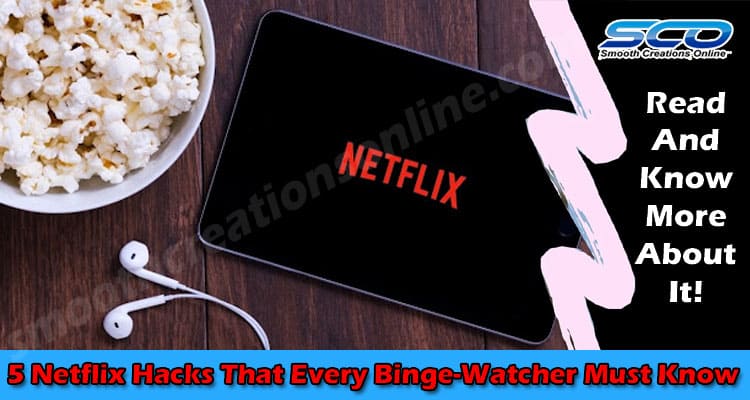 Netflix Hacks: The title of “The Binge-watcher” would go to the person with the biggest watchlist, the highest number of shows streamed, and the longest hours spent streaming. But some of these people may not know the best way to stream Netflix through hacks and tricks. If you’re one of these people, this article is for you.

If you’re looking to stream Netflix movies to watch in UK, we have prepared 5 Netflix hacks for you that you’re unaware of. Each of these tips are lifesavers and features we didn’t know existed. Some of these are built-in and some are external tools to improve your streaming experience as a binge-watcher. Let’s get started.

Some of us make it halfway through a feature and decide not to continue. But then, you find that feature in your watchlist, waiting for your FOMO to hit and that’ll cause you to continue watching it. In the earliest time, many people struggled with removing half-watched features by searching for the little trash icon or X icon.

But there is a way these features get off your list before they get into your recommendation. You just navigate to your settings and go to watch history. From there, you will see a list full of your “still watching” feature. Netflix does ask you sometimes whether you’d leave feedback on the feature, which you can share or ignore.

Netflix also has a feature on the app, that displays “still watching” up to a point, after which some features are long gone. For example, it won’t show you the half-done episode of 2019, as much as it will focus on your last month’s half-done shows. Also, any form of feedback to Netflix improves recommendations.

Streaming Netflix late at night on your phone has caused more phone-to-face contact than calling ever did. Sometimes you don’t want to be upright or sitting while streaming Netflix and want to take it to the bed (for watching shows, obviously). Now, instead of you turning your head, let Netflix flip for you.

There is a browser extension called Net-flip that rotates your screen either 90 degrees or 180. That way, you can lie down properly and have the laptop do all the flipping. This creates comfort and doesn’t disturb the aspect ratio or subtitles of the feature. This feature requires you to download the extension and use Netflix on the browser.

We’ve all been at the end of the show where the closing credits are either interesting or give us time to think about our next watch. That is when the ticking bomb of autoplay triggers and gives you less time to think, till it takes you to the next episode. Annoying? Yes, it is!

Netflix not only offers features but also has ways to disable them. If you navigate through settings, you will find the “disable Autoplay” option. This will save you from the trouble of worrying about the instant play of the next episode and will not rush you into episodes you’re not ready for.

This feature also helps you control your amount of streaming, otherwise, your device will be in an endless loop of streaming. Also, if you fall asleep in the middle of an episode, the Autoplay won’t go all the way till the season finale itself.

We’re all aware of the awesome download feature of Netflix that allows you to store some of your favorite features and TV shows. It works best for those who don’t have a stable internet connection and still want a seamless experience. Even in TV shows, the download feature helps a lot, but the hassle of removing downloads is also our work.

Because your subscription limits the storage in download, you will have to clear some space by removing episodes or TV shows. Sometimes, you’ll need to download half a season, watch it, remove it, and then download the other half. The workaround for this is Netflix’s Smart Download.

Imagine if you’re watching Breaking Bad and your capacity is one per day. After you’re done watching one downloaded episode, the next episode will automatically start downloading, and the first one will be deleted. That way, Netflix takes the hassle of downloading and removing away from you and gives you a fresh downloaded episode every time.

The 5th cool hack we have works best when you have friends to stream content with. This feature was started by Amazon Prime, and it won the audience. To Netflix, it is in the form of an extension called Netflix Watch Party.

Through this, people can stream the same content from different locations and can live chat. This will bring the people closer together and give everyone the fun of Netflix streaming together.

By now, you must be saying “what features were I missing out on!”. Netflix has more cooler extensions and features in store, so if you’re a pro-binge-watcher, these hacks are sure to improve your Netflix streaming experience. Enjoy!