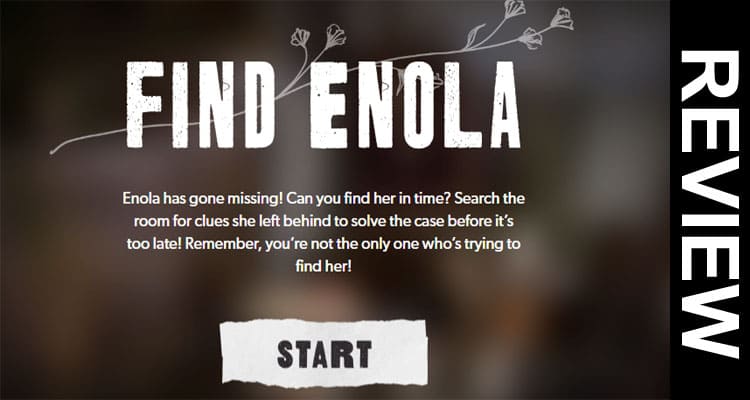 Findenola Com is a simple mystery game based on the new Netflix film Enola Holmes, released on 23rd September 2020 in the United States.

Enola Holmes is the younger sister of the world-famous detective Sherlock Holmes and government official Mycroft Holmes. Set in Victorian England, the movie and the game capture well all the aesthetics of that period. Enola, like Sherlock, is exceptionally bright and diligent. She defies the gender norms set for women in the 19th century and lives by her own rules.

What is Enola Holmes about?

Read further to find out more about the game ‘Findenola Com.’

Enola Holmes is a film about a young girl who escapes her home to find her missing mother. The film is based on the book The Enola Holmes Mysteries: The Case of the Missing Marquess by Nancy Springer. Enola is the youngest sibling of the Holmes brothers. Her father passed away when she was little, and her brothers, Sherlock and Mycroft, left for London soon after.

Enola grew up with just her mother, Eudora, which made their bond very close. She was homeschooled by her mother, an eccentric but brilliant woman. They played many word games and chess together; Enola also learned jujitsu and painting from her mother. They were especially fond of painting flowers, of which Chrysanthemum was Eudoria’s favorite.

Scroll ahead to know more about the game

You will be transported to a different era playing this game, from chintz wallpapers to overstuffed chairs with elegant Persian rugs underneath. Set in Eudoria’s private room, the fun begins with a search for clues to find Enola, a task undertaken by Mycroft as he is Enola’s legal guardian.

The game, Findenola Com, is of a detective-style which also is the mood of the film. You can look around the room in search of clues that will lead you to Enola. The subtle orchestra style piano music plays in the background while you look for four cards. The game also features a magnifying glass, which can come in handy while inspecting the place for clues.

The room is exceptionally cluttered; with paintings of flowers hanging on the walls to unwashed china cups littering the side table.

In the Findenola Com game try clicking on as many unique objects as possible since anything can be a clue here. Many items in this room have a story to tell, one which you will view as a small video clip. Like Mycroft’s caricature made by Enola to the racquet that she used to play with her mother indoors, this game has got its detailed right.